The Health Care Study bill has been approved by the Oregon legislature.  Read the story from Oregon Capital Insider.
Date:  July 1, 2015

Healthcare Financing Study Bill Clears Difficult Hurdle with $300,000
(The difficult hurdle was passage out of the House Budget committee.  Now this needs to be approved by the full House.)

A study first conceived by Sen. Michael Dembrow in 2013 that passed without funding, has repassed with $300,000 in state money after private donations came up short. Support for the study has a bipartisan history, but as a thorough and objective study comes closer to a reality, the political pressure mounts against it. The state money, however, is enough for the study to move forward.

Read the rest of the story.

The HCAO Legislative Committee would like every HCAO activist to contact (by email, phone, or in-person) their senator and representative to urge them to support HB 2828, which funds and extends the dates for a health care financing study that was approved as HB 3260 of the 2013 session. For more information about HB 2828, see the attached document entitled Summary of HB 2828.

Make sure to identify yourself as a constituent, and thank them for their work. If you know of any bills that you like that they have supported, you could specifically thank them for that.  If you are phoning, there is high likelihood you will be leaving a voice message. For it to be effective it needs to be short and concise. To that end it is recommended that you write out your message in advance of your call. A document with possible simple messages is attached; seeExample Message to Legislators.

You should ask your legislators to contact the co-chairs of the joint ways and means committee Listed in the sidebar, and to request $400,000 to fund the HB 2828 study.

You should also ask them to contact other colleagues on the joint ways and means committee with whom they have a good relationship. You don’t need to tell your legislator who these members are, but for your information they are listed in the sidebar.

Of course, if any of these legislators represent you, alter your message accordingly. If you don’t already know, you can find your legislators, their email address and phone number, here.

You should personalize your message to your legislators, and you can use one or more of the points below to encourage them to support HB 2828: 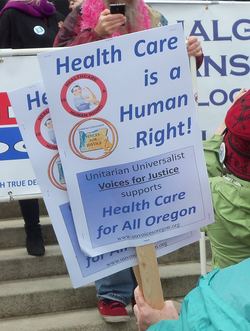 HB 2828 - This bill would extend the Study Bill enacted during the 2013 legislative session for two more years, provide for reporting on the study's progress, and provide funding for the study.  The original Study Bill did not provide funding, instead calling for that study's advocates to generate the funding.  Included in the study is comparison of four possible mechanisms for providing financing of health care in the state of Oregon.  Legislative sponsors when this was introduced were: Representative SMITH WARNER, Senator DEMBROW; Representatives KENY-GUYER, KOMP, NOSSE, WILLIAMSON, Senators BATES, EDWARDS, GELSER, MONNES ANDERSON, ROSENBAUM, STEINER HAYWARD

SB631 - This bill would establish a universal affordable health care system in the state of Oregon   If enacted, the bill would provide comprehensive health care coverage to all individuals residing or working in Oregon.   Legislative sponsors when this was introduced were: Senators DEMBROW, SHIELDS, Representatives SMITH WARNER, WILLIAMSON; Senators MONROE, PROZANSKI, RILEY, Representatives BARKER, BARNHART, BUCKLEY, DOHERTY, FREDERICK, GALLEGOS, GOMBERG, GORSEK, HELM, HOLVEY, HOYLE, KENY-GUYER, LININGER, LIVELY, NATHANSON, NOSSE, RAYFIELD, REARDON, VEGA PEDERSON, WITT.
2015 HEALTH CARE FOR ALL OREGON RALLY
ON THE CAPITOL STEPS
Feb 11, 2015
Gather at 11:00 AM
Rally starts at 12 noon
Salem, OR
Mark your calendar and join Health Care for All Oregon (HCAO) on the Capitol steps in Salem, February 11th from 11 a.m. to 1 p.m. We expect 2,500 people carrying signs and banners while they listen to a program of great music and inspiring speakers.

Register today for the HCAO Feb 11th Rally at www.HcaoRally.net.
Going from the Portland metro area?  Buses will be going down from 5 metro locations.  All the info and register for the bus at www.hcaorally.net.

There will also be the opportunity to join a group to meet with legislators. Don’t wait – start your plans to fill a bus, a van, or caravan of cars and spend the day in Salem telling Oregon Legislators that we want universal, affordable health care for all people.

Everybody in and nobody out! Why?
Because we believe health care is a basic human right!